Kathryn Tucker Windham and others talk about the lore and legend behind the haunts lurking throughout the state of . 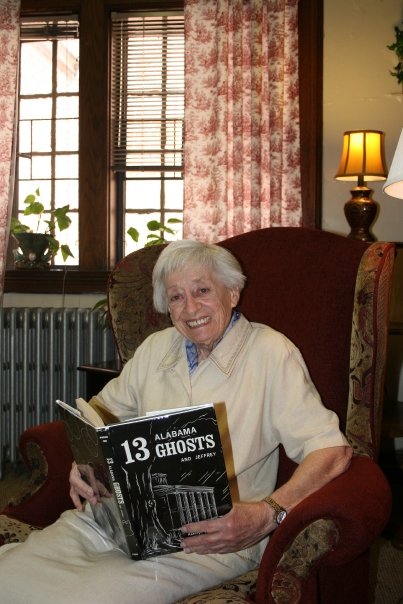 Kathryn Tucker Windham is an alumna of (class of 1939) who became one of the foremost storytellers in the country.  She published her first book in 1967 (Treasured Alabama Recipes) but is most known for her ghost stories.  In 1969, along with co-author (and faculty member) Margaret Figh, she published 13 Ghosts and Jeffrey.  This was followed in coming years by a number of other books, most with Ms. Windham as sole author, collecting further ghost stories in and expanding to other states in the South.

Ms. Windham was a founder of the National Association for the Preservation and Perpetuation of Storytelling, and in the 1980s, she was heard around the country on NPR.  This award-winning author and storyteller was also a noted photographer and had her first exhibition in 1993.  In 2008, on the occasion of the year of her 90th birthday, the Library of Huntingdon College renamed a room in its original building to “Kathryn’s Study” to honor Ms. Windham.  This student reading room is designed to call to mind an old-fashioned study.  Upon seeing the room, Ms. Windham quipped that the name should read “Kathryn – Study!” in recollection of her student days.

By-the-way, Jeffrey, in case you were wondering, is the ghost who resided in Ms. Windham’s home in .

(For more information about Kathryn Tucker Windham, read her entry in “This Goodly Land: ’s Literary Landscape” at http://alabamaliterarymap.lib.ua.edu/.)

Kathryn Tucker Windham in "The Ghosts of Selma"