Frankenstein Mini-Conference "What It Means to be Human": http://libguides.huntingdon.edu/FrankensteinConference

Here you will find information about the Library's 2019 "Mini-Conference." Our theme this year is "What It Means to Be Human" in celebration of the 200th anniversary of Mary Shelley's FRANKENSTEIN. Below you will find the Call for Proposals, a template 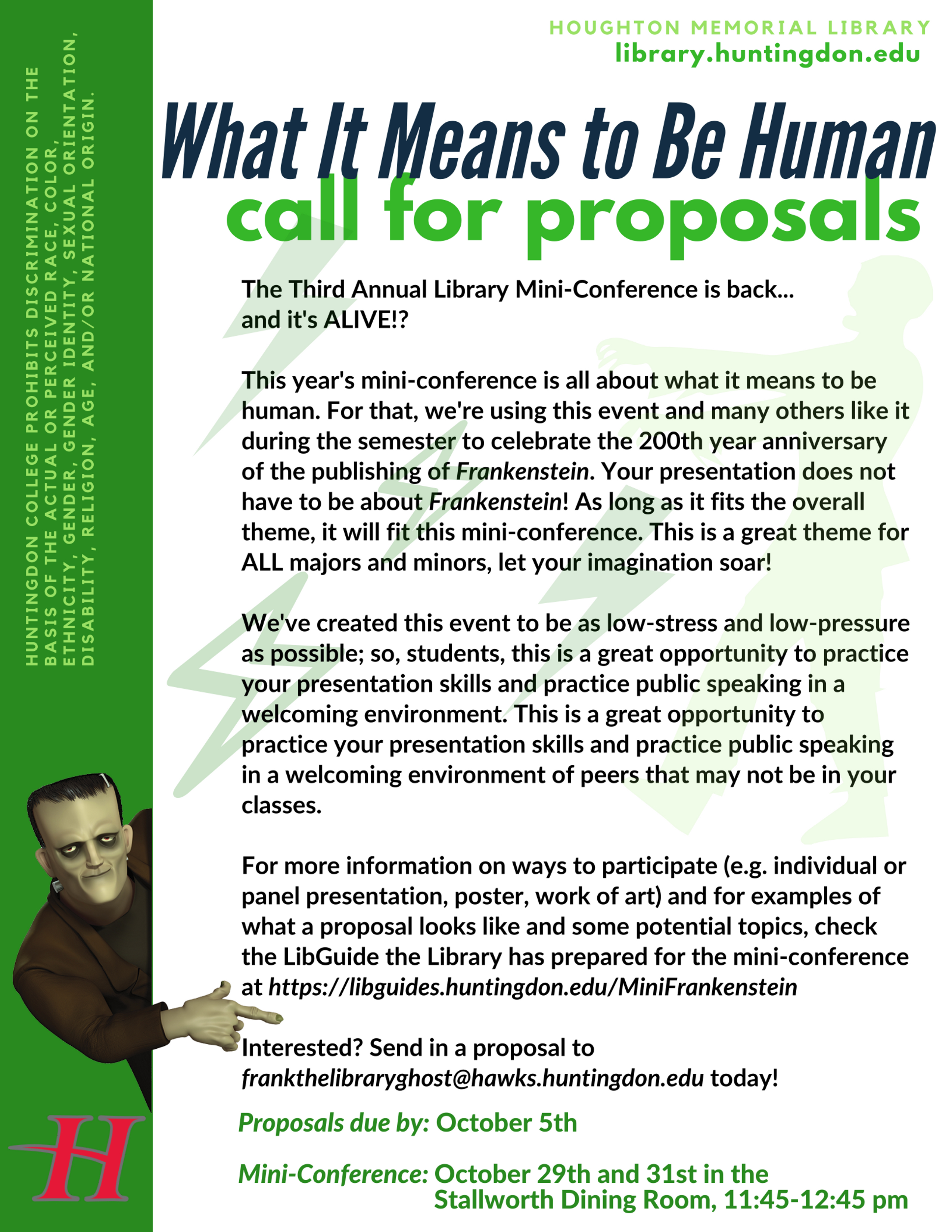 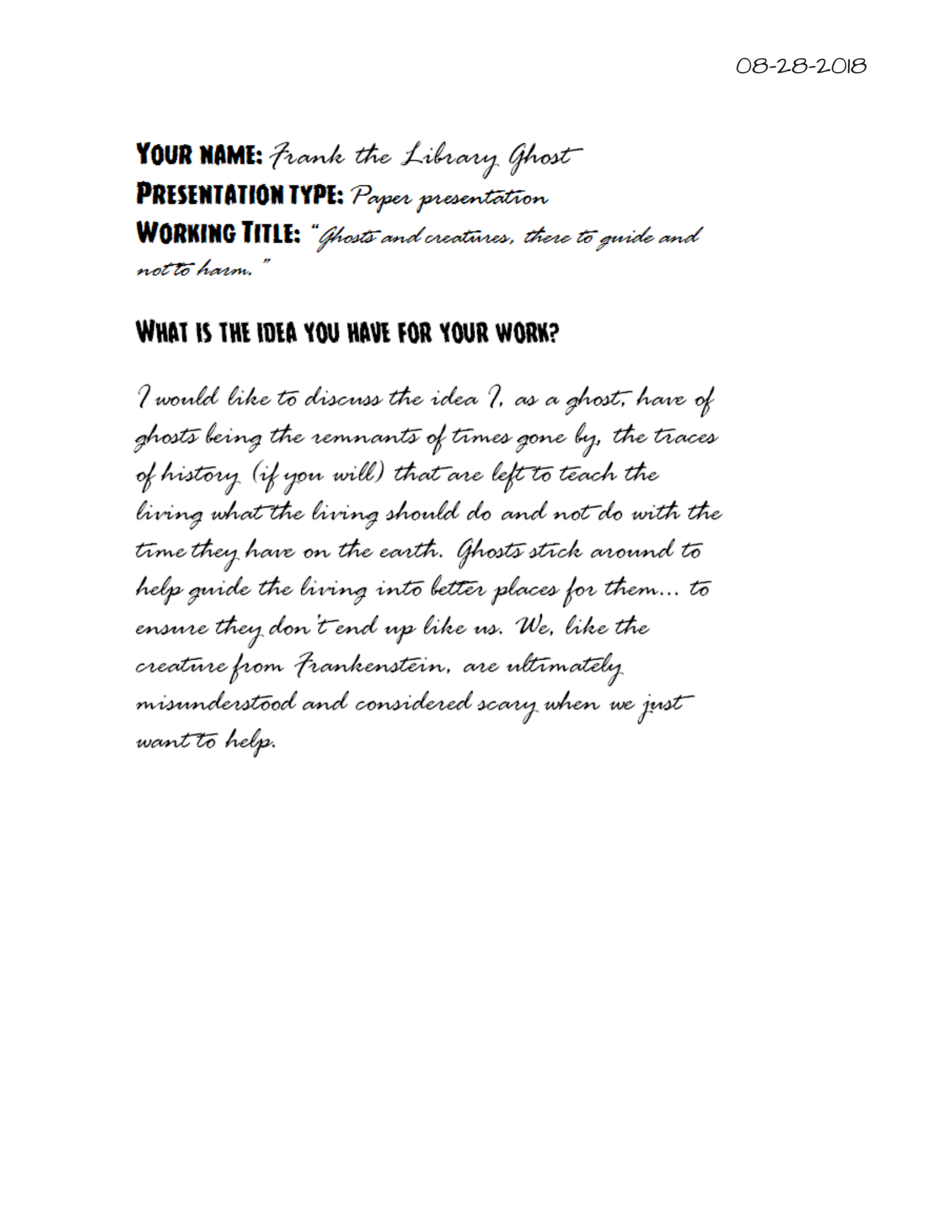 Will you be needing any technology? If so, note what type. (projector, hdmi cord, speakers, etc.)

What is the idea you have for your work? Explain it to the best of your ability in a paragraph or so.

(See the box to the left for a filled out example --  click on the arrow to advance the window.)

(For some suggested topics, see the box below. Click on a tab to reveal topics! Remember, these are only some suggestions! You are only limited by your own imagination when it comes to potential topics.)

Examples of potential topics (there could be many more!)

Does Frankenstein have anything to say relevant to the #MeToo or Black Lives Matter movements?

Consider the film The Bride of Frankenstein.  Discuss the physical appearance of Victor's female creation as opposed to that of his male creation.

It is said that music (or art in general) has the power to tame the savage breast.  Discuss this well-known quote within the context of Frankenstein or humanity in more general terms.  What role do the arts play in our humanity?

Create a work of art on our theme "What It Means to Be Human."

What methods are being used in the medical field to bring people "back to life"?

Is it ethical to attempt to make someone rise from the dead or give something life?

What are some medical procedures you could liken to Frankenstein's creation?

Is a clone of a person a real human?

Do DNA patterns make up individuals as they are? Are we programmed to be certain ways? What does this say about free will?

Nature vs nurture in making us who we are as individuals  - discuss.

Frankenstein and birth: Was the Creature born?  Discuss in relation to "test-tube" babies or other "artificial" methods of reproduction.

How has "creation of life" been viewed throughout a historical period?

Who has been deemed "human" throughout history?

What historical events influenced Mary Shelley and her writing?

Who were Mary Shelley's contemporaries and what historical impact did they have in the development of human society?

Is what Victor Frankenstein did ethical?

Consider the Creature's status within the context of Aristotle's concept of the soul and answer: Was the Creature human?

Do you see any biblical characters paralleled in Frankenstein?

Can what is ugly also be beautiful?

Who is the "monster" in Frankenstein?  Is there one?  What are the effects of labeling a person or group of people "monstrous" or "evil"?

What psychological need did Victor Frankenstein have to try and create life as he did?

Does the Creature or Frankenstein have any personality disorders?

What was the driving force of the Creature's violence (when provoked)?

Discuss the Creature within the context of the psychology of the abandoned child.

Is Victor Frankenstein mentally unbalanced?  Is the Creature?

What role does loneliness play in humanity?

The Creature exhibits a need to belong.  Talk about this within the context of human psychology.

Why do we like to be scared?  (e.g. read scary stories, watch scary films, visit "haunted houses" at Halloween)

What kind of PT must Frankenstein have done with the creature to get him to be able to walk on post-surgery legs?

What exercise routine would you recommend to Frankenstein to get his "heart pumping" and to help him not be so stiff?

Is the Creature disabled?

Would the Creature be covered under the ADA?

What did the communication between Frankenstein and his creature look like? How could it be improved?

How did Frankenstein communicate with other people?

Consider the way Frankenstein communicated with his creature.  What does this say to those around him? How did it affect the views of others toward the Creature?

Considering the Creature's ability to speak in the novel, discuss his speaking skills.  His articulation.  His vocabulary.  How does one's level of speech (e.g. use of proper grammar, elevated vocabulary) influence our perceptions of that person?

Discuss the literary influences Mary Shelley's novel has had.  How has her novel influenced other authors?  How has her story been reborn?

Discuss the works of literature that influenced Mary Shelley.

Mary Shelley's novel falls within the Romantic Period.  How has this period defined our humanity?

The Supreme Court in 2010 effectively gave corporations personhood (Citizens United v. Federal Election Commission, stating corporations have the right to make political contributions under the First Amendment).  Discuss the implications of this as to "what it means to be human."

Do some research on "The Ford Pinto Memo."  What is the value of humanity in corporate America?

What is the social responsibility of business? (e.g. Milton Friedman's essay)

Explore how the characters in Frankenstein have been used commercially (e.g. product development, advertising and marketing).

Would you consider the Creature to be educated?  Defend you position.

What is the role of education in our being human?  What does it mean to be "educated"?

It was forbidden to teach slaves in the American South to read and write.  Why?  Can you relate this to Mary Shelley's story?

How does the Creature develop intellectually?

Is our technology the creature or the master?

Does Frankenstein have anything to say relevant to our criminal justice system?

Does Frankenstein have anything to say relevant to the #MeToo or Black Lives Matter movement?

Discuss how the Frankenstein story has be "reincarnated" in popular culture.

The Creature is rejected because of his perceived ugliness.  How is physical beauty portrayed in modern media (film, television, music, commercials ...)

Discuss some of the ways Mary Shelley's story has been adapted for film.  How "true" to her story have film adaptations been?  Compare the early American Frankenstein films to the British Hammer Production films and their depictions of the Creature.